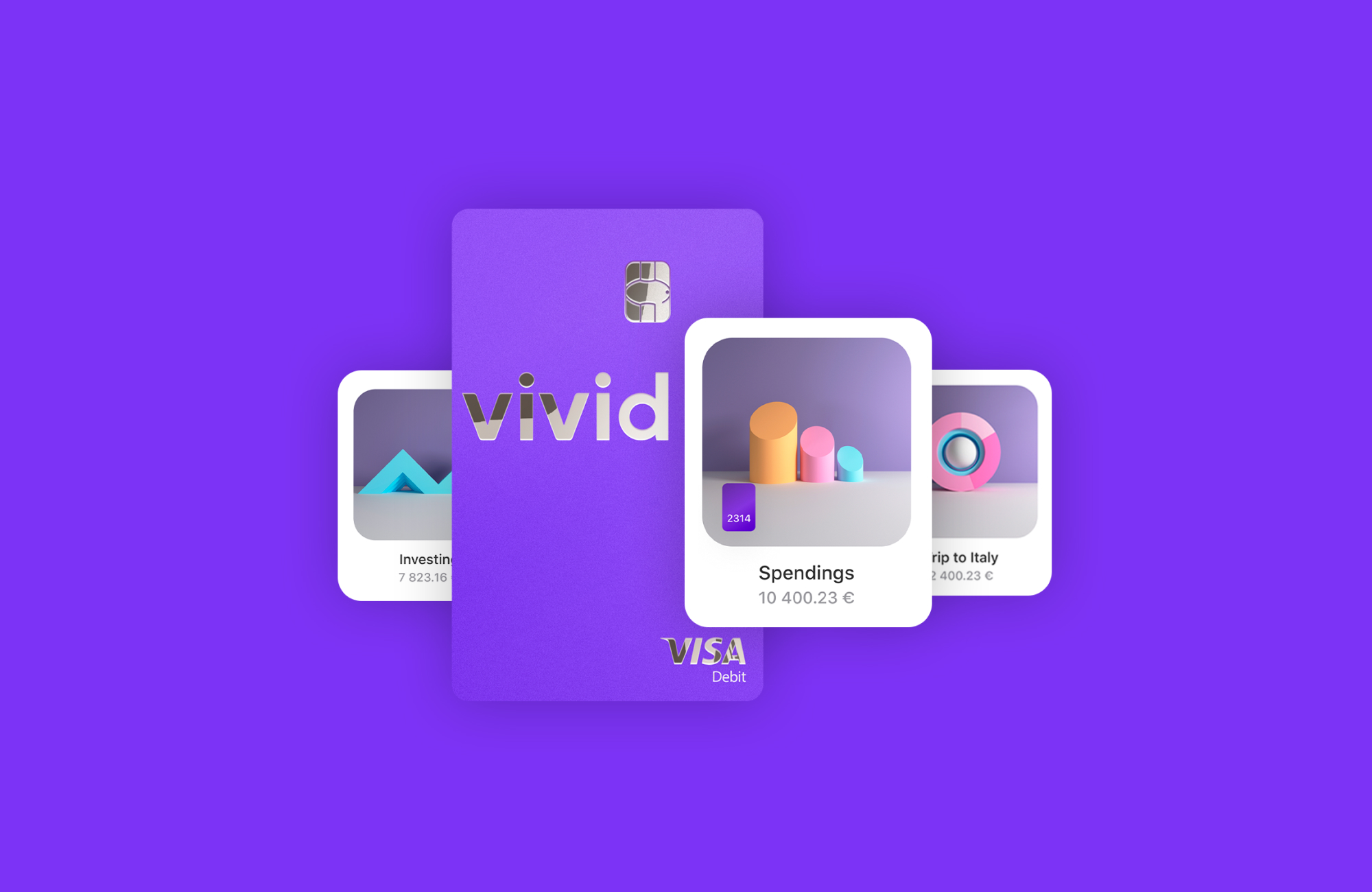 Berlin, July 22, 2021 – The Berlin-based fintech Vivid adds further payment options to its top-up function via Open Banking. From now on, Vivid customers will be able to top up their Pockets with Apple Pay, Google Pay, credit and debit cards in real-time and access the money directly. This enables new customers, in particular, to add money to Vivid directly after verification, make mobile payments with the virtual Visa cards, and invest in over 2,000 shares and ETFs or 50 cryptocurrencies instantly.

Download the app, identification, create a virtual Visa debit card in the app and add it to Google Pay or Apple Pay - in just a few minutes, new Vivid customers are ready to start using Europe's first financial platform for investing, banking or saving immediately. Until now, new customers had to wait several business days until the money was available on their Vivid accounts. But this is now a thing of the past. From now on, Vivid offers all customers the possibility to load money in real-tie via Apple Pay, Google Pay as well as credit and debit cards into their Vivid app free of charge and use their Vivid account right away.

Vivid customers simply enter their Visa or MasterCard card number, the expiration date, and the security code and confirm the payment. For maximum security, Vivid natively integrates the PSD2 strong customer authentication standards into the app. In addition, customers can save the card for future top-ups. With Apple Pay and Google Pay, customers only need to select the card already stored in the respective wallet and confirm it with the device code, fingerprint or TouchID, or face or FaceID. The money appears directly in the selected pocket.

"A new exciting new investment opportunity in a great stock is now on the Vivid app, but there's not as much money on the Vivid Pockets as the user would like to invest? Or you just installed the Vivid app and now you want to begin directly investing in the crypto market? So often, our customers have asked if there could be a way to add money into the Vivid app even faster. With real-time top-ups, we are now minimizing annoying waiting times like having to wait up to a whole day or longer to receive your money," Alexander Emeshev, co-founder of Vivid, points out. "With our new feature, customers simply add money into the Vivid app from another account and invest conveniently."

This means that Vivid users in all markets have access to a wide range of top-up options and can decide for themselves which variant best suits their everyday life - whether SEPA transfer, Open Banking, Apple Pay and Google Pay or credit and debit card.

Real-time top-ups are offered in cooperation with ECOMMPAY, an international payment service provider and acquirer. ECOMMPAY is headquartered in London, has six offices worldwide and employs over 700 people. The authorized payment institution is regulated by the Financial Conduct Authority and holds both Visa and Mastercard Principal Membership.

About Vivid
‍Vivid is the first financial platform that combines all daily needs around money in one app. Whether investing, banking or saving, Vivid offers a simple, flexible and transparent solution to help customers grow their wealth. The company aims to provide customers across Europe with an unparalleled investment and banking experience, offering a wide range of financial services without unnecessary fees. Just eight months after its launch in June 2020, over 100,000 customers are already using Vivid products in Germany, France, Spain and Italy. Vivid was founded in Berlin in 2019 by Artem Yamanov and Alexander Emeshev and is made up of an international, highly qualified team of more than 300 employees. The app, the customer service and the processes for the maintenance and further development of the app have been tested and awarded by TÜV-Süd. After only one year, Vivid has already raised over 100 million euros from renowned investors, including Ribbit Capital and Greenoaks Capital, and is currently valued at 360 million euros.