The Community directly in the App: Invest smarter with “Vivid Beat” 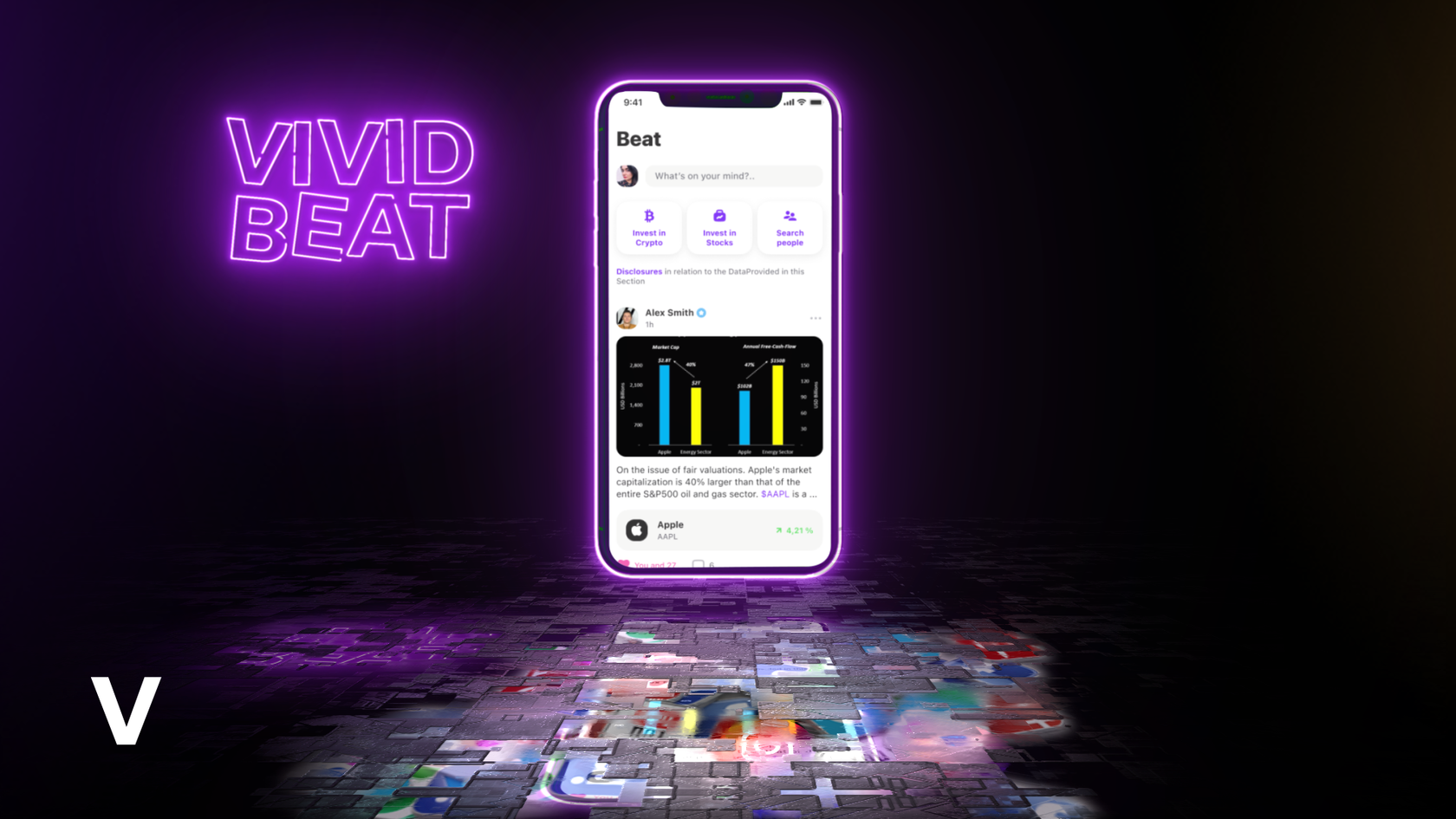 ‍Berlin, February 24, 2022 – With the launch of “Vivid Beat”, the mobile financial platform Vivid is expanding its app with a game-changing key component: The Vivid Community. The app’s existing newsfeed of financial news, reports, analyses, and editorial content will be connected with Vivid’s hundreds of thousands of users across Europe.

Newcomers and experienced traders alike can now invest smarter thanks to the experiences and successes of other users. Posts from the community are displayed in the new "Vivid Beat" menu tab, as well as the overview page of the respective asset, whether stock, ETF, cryptocurrency, or precious metal. This way, investors can see everything, from price information, news, analysis, Vivid editorial articles and community posts, on the same page they invest from. On the user’s "Vivid Beat" profile, additional information about the user’s respective portfolio and its performance to date can be viewed.

“All investors want to make smart investment decisions. We have learned that many investors inform themselves backward: They come across an asset they find exciting, visit the respective asset page and then validate their opinion with the media and other official sources. In our experience, the wisdom of the crowd, the community, can have more impact on the final investment decision than traditional sources. With Vivid Beat, customers benefit from the insights and successes of the community. Allowing users to learn, follow and validate the views and opinions of the community based on the results of their portfolio, limiting the guesswork. Vivid Beat doesn't just create a new way to connect; it opens the door to the future of investing for all”, says Alexander Emeshev, co-founder of Vivid.

With "Vivid Beat", the community can now exchange information about the development of the financial markets as well as their own trading experiences and share personal opinions and tips. This exchange is intended to enable even more people to enter the world of investing and saving and make it easier for them to take their first steps. "Vivid Beat" complements the many existing Vivid features, such as the "Vivid Classes. “ These tools are designed not only to make money-related decisions more accessible for customers in all financial situations; in fact, they are intended to make them possible in the first place.

‍“Vivid Beat” will start as a beta version for the Vivid editorial team as well as about 300 selected Vivid users, who will be able to post actively. Already now, all current Vivid users can read and react to posts. After the test phase, all Vivid users, whether they have already invested or not, will be able to join “Vivid Beat” and actively participate in the community. From your own investment successes to learnings from failed investments to tutorials, everything can be posted on "Vivid Beat". In turn, all users on the app will be able to react, comment, and support each other.

‍Becoming a part of “Vivid Beat” in mere minutes

‍It is easy to become a part of the community: Users create a “Vivid Beat” profile under the "Vivid Beat" menu item and select a user name and decide for themselves whether they want to use their real name or a pseudonym. Further information about themselves or their portfolio can be provided optionally. The exact investment data is not shared. In addition to the assets in the portfolio, only percentage-based changes are visible to the community to understand investment successes. If "Vivid Beat" users want to share the portfolio sum, this only happens in ranges (e.g., 3,000 euros to 5,000 euros for a portfolio of 4,000 euros).

As soon as they are registered, users can use the platform to write posts, comment, and share their experiences and tips with other Vivid users. A post can be up to 4.000 characters in length and can be edited for up to 15 minutes after posting. Community members can also follow other members and tag them in posts via the @ character. With so-called “Tickers”, which function similarly to hashtags, businesses, ETFs, crypto-tokens, and precious metals can be tagged via the $ character.

‍Vivid Money is the first financial service platform that combines all your daily money needs in one app. Whether it’s spending, saving, or investing – Vivid Money offers an easy, flexible, and transparent solution to grow your money. The company's mission is to provide their over 500,000 customers throughout Europe with a superior banking and investment experience and to offer a wide range of financial services (including savings accounts, multi-currency accounts and investments in stocks and crypto) without unnecessary fees. Vivid Money was founded in 2019 by Artem Iamanov and Alexander Emeshev in Berlin and consists of an international, highly qualified team of more than 300 employees. Vivid has already raised over 200 million euros from renowned investors, including Ribbit Capital, Greenoaks Capital, and the SoftBank Vision Fund 2, and is valued at 775 million euros.